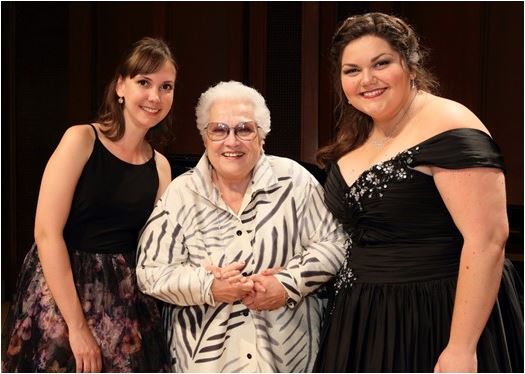 Soprano Hannah Rose Kidwell and pianist Christina Giuca will perform in recital on tour in March 2018 in Houston, Santa Barbara, Chicago, and New York City
Santa Barbara, CA — The Music Academy of the West proudly hosts the nation’s premiere annual competition for song recitals, the Marilyn Horne Song Competition. Academy fellows have competed annually since 1997. This year, the competitors performed for a panel of esteemed judges – Marilyn Horne, Renée Fleming, and Jake Heggie. The 2017 winners of the Competition, soprano Hannah Rose Kidwell and pianist Christina Giuca, will perform a program including the world premiere of a song cycle written by Jake Heggie, who was a guest composer at the Music Academy this summer.
The cycle was commissioned as part of a Commissions and Premieres Program, composed with the winners in mind. Each winner receives the Regina Roney Prize of $5,000, and is presented in the national recital tour which includes Houston at St. Paul’s Methodist Church (Thursday, March 22, 7 pm), Santa Barbara at Hahn Hall on the campus of the Music Academy of the West (Monday, March 26, 7 pm), Chicago at the Preston Bradley Hall of the Chicago Cultural Center as part of the Dame Myra Hess Memorial Series (Wednesday, March 28, 12:15 pm), and New York City’s Steinway Hall (Friday, March 30, 7 pm). The Chicago recital will be broadcast live by WFMT 98.7 FM and streamed live at wfmt.com.
In addition to the award and recitals, artist winners receive coaching from the Academy Voice Program faculty artists, as well as consultations with New York-based communications firm 21C Media Group and professional photos.
Admission for these events will be free in Houston, Chicago, and NYC, and affordably priced at $10 in Santa Barbara, with 7-17 year olds admitted free when accompanied by a ticketed adult. Tickets go on sale to the general public on January 9. The competition and winner’s recital tour has been generously supported by The Little One and The Lucky One Foundations and Steinway & Sons.
About the Marilyn Horne Song Competition Winners 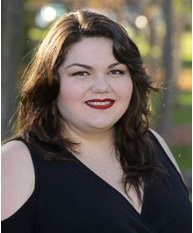 Soprano Hannah Rose Kidwell, 21, born in Montebello, California is a third year bachelor’s student at Chapman University. In Chapman’s opera program, Ms. Kidwell has performed in Donizetti’s L’Elisir d’Amore, Kurt Weill’s After Dark, and portrayed the title role in Puccini’s Suor Angelica. Ms. Kidwell most recently made her debut with The Pacific Symphony as the Witch in Hansel and Gretel. Ms. Kidwell was a semi-finalist and scholarship winner at the national Classical Singer Competition, the winner of the New Century Singer’s Competition, and the most recent winner of the Vocal and Concerto Competition at Chapman University. 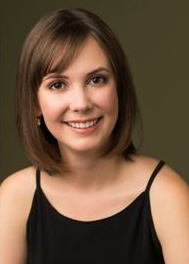 How to resolve AdBlock issue?
X